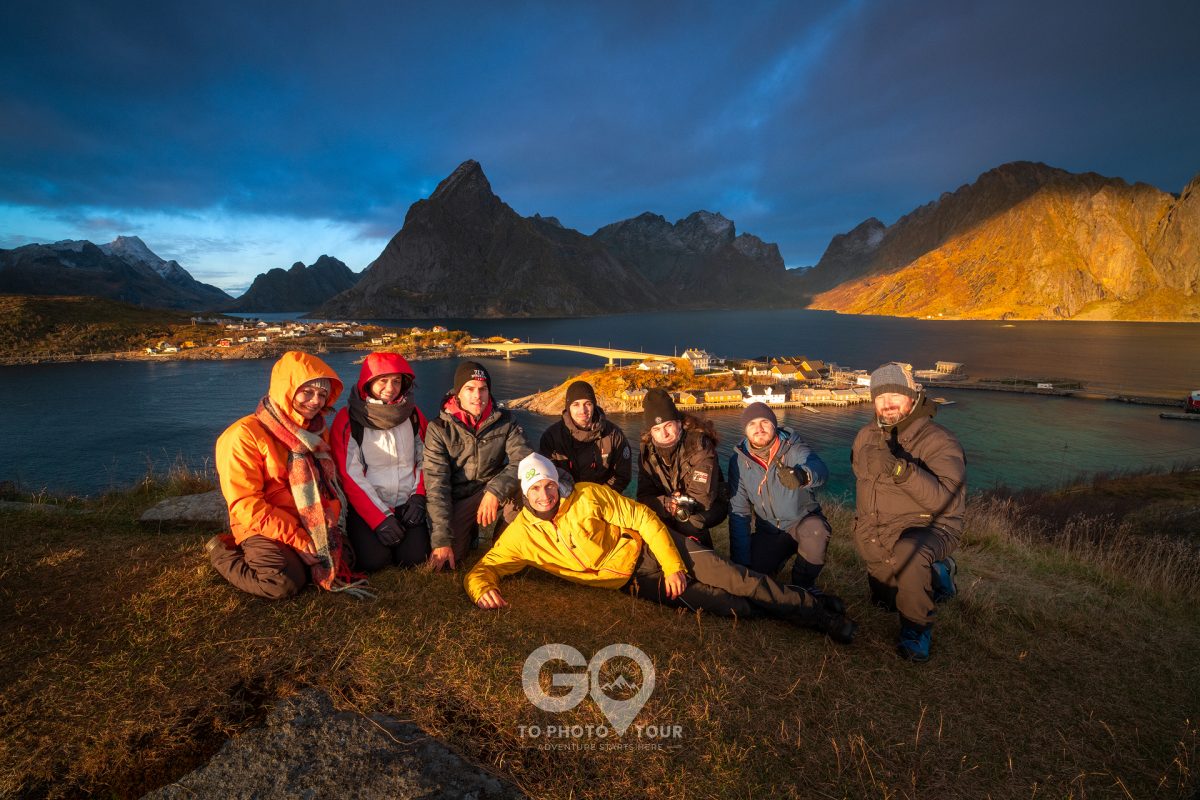 The snow hasn’t arrived yet this November, but Lofoten has given us magical moments of light and colour.

Sometimes the weather challenged us, but we followed the most beautiful skies and got great photos.

We spent a week photographing all the most beautiful places on the Lofoten islands, an archipelago located inside the Arctic circle unique for its dramatic landscapes. Majestic snow capped peaks stand out in the middle of the sea creating enchanted fjords. The typical red villages that create a fairytale atmosphere by thinning the line between reality and magic.

At night the Arctic pink colors turn green, illuminated by the Northern Lights.

If these islands enchant you during the day, during the night they steal your heart!

If you want to experience this dream, we invites you to join one of our Arctic photography trips!

This tour started with a bang, as soon as the guys got off the plane, just the time to put their suitcases into the van and we reached an exclusive spot not far from the Evenes airport. The Aurora was coming!!

We had in front of us a snowy mountain behind a lake and illuminated by the moon with a dancing Aurora Borealis in the sky, what a start!

Then, with the already excited group we reached our base near Leknes, in the heart of the Lofoten islands, in about 3 hours of driving, in these seaside villas we slept all week.

Their position is truly strategic, driving an hour you can reach the best spots to the south and to the north.

At 8am we left the house to reach the magnificent Haukland beach and wait for the sunrise looking for some captivating photographic compositions.

The sky was flat without clouds but the sun illuminated the mountain creating very interesting colors and reflections for our photos.

Here we started studying photography theory and technique in the field, some techniques like focus stackimg and HDR and, at the end of this photography session at dawn I already saw some interesting compositions and works, great guys!

After a hearty breakfast with typical dishes, our day continues to another wild beach, known as the beach of the dragon’s eyes, that of Uttakleiv, where we waited for the sunset.

We returned to our villas for dinner after buying food at the market. This moment is always fun for the whole group, between laughter and various cooking attempts 😂

After Dinner the sky was clear, we went out and returned to the beach of the dragon’s eye to wait for the Aurora but, it showed itself rather weak and only towards the north.

The guys had fun creating nice compositions with the stones in the foreground and the Big Dipper in the background.

Our day started with a fantastic sunrise, perhaps the most beautiful of the whole week.  We reached in around one hour by car the village of Hamnøy, the most famous and most fairytale village of the islands, up there on the bridge we waited for the sunrise.

In an unreal, mystical environment, suddenly the light gave us a great show.

The mountains in front of us turned red and a rainbow was created just to the left of the village.

“This landscape seems fake!!”  This is what the guys tell me every time when they are there.

After a stop in a typical coffee shop in Reine, our photographic adventure continued towards the last southern village of the Lofoten islands, that of Å, where the famous E10 road ends.

In this village of red cabins we have found another moment of crazy light.

After a stop in a restaurant in Sakrisøy to eat the famous fish soup and fish burger, in ten minutes of trekking we reached the top of a hill, where with a 360 degree and breathtaking view from up there, you can see the three most fairytale villages of Lofoten islands, Hamnøy, Sakrisøy and Reine.

After this experience we reached Vareid beach, one of my favourites.

Here we photographed a Magenta sunset, typical of the Arctic.

After dinner, we did the first photo studio and edit session in front of the computer connected to a large monitor inside our Villa.

Starting with a night shot of the Aurora Borealis, taken in the dragon’s eye spot.

The photo was composed of multiple shots using the double exposure and focus stacking techniques. So, after having seen how to do these techniques in the field, in front of the computer we studied how to put the various shots together and how to edit the photo.

The lesson was recorded and at the end, sent to the whole group.

We continued our week hunting for colourful light by going to the most exclusive spots, waiting for the sunrises in the southern part of the Lofoten Islands and the sunsets towards the north.

When the light was dramatic we reached the most suitable spots, like waterfalls and rough peaked mountains, when the Arctic colors gave their best we went to capture beautiful photos in the beaches and beautiful colorful villages. Here you can see some behind the scenes photos.

There were other edit sessions in front of the computer with recording.

Where we studied how to edit a night shot of the Milky Way and how to assemble and edit a panoramic (after having obviously studied it in the field).

In the end, in the last study session, we analyzed some shots taken during the week and edited a daytime photo from the raw file to the web file, obtained with various techniques in the field.

After our last sunrise in wild and mystical Myrtland, we left Lofoten to spend the last night near the airport.

During the trip we stopped in the epic village of Henningsvær, where the guys enjoyed capturing Norway’s most famous football field from above, its charm is truly unique.

Another stop at a lake along the way, where the atmosphere was really magic and peaceful, the water was a mirror and everything was reflected.

Our adventure ended with a fun dinner in a restaurant in Harstad.

Thanks guys it was an unforgettable week.

Giulio Cobianchi led the group through the wonders of these islands. He is a professional landscape photographer, experienced and specialized in night photography with almost 10 years of experience. He moved to the Lofoten Islands in 2019 to live the dream of magical Arctic nights. He knows the islands like the back of his hand, with him you will be at the right time in the right place. His satisfaction is making your dream come true.

Check out upcoming tours to Lofoten 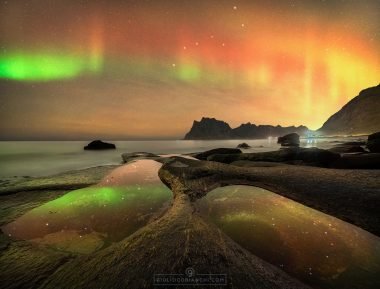 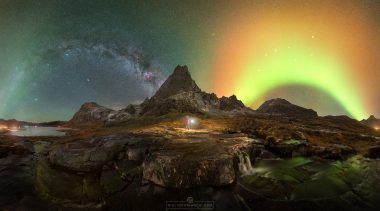 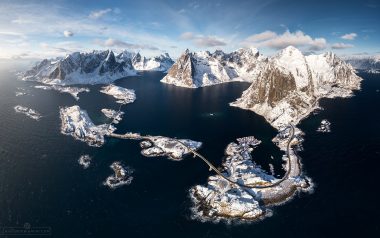 The magic of the Arctic

Check out the Lofoten gallery 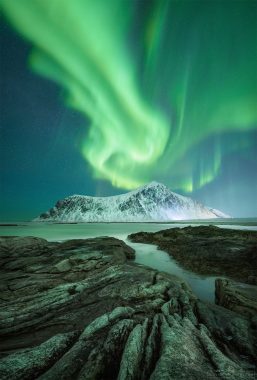 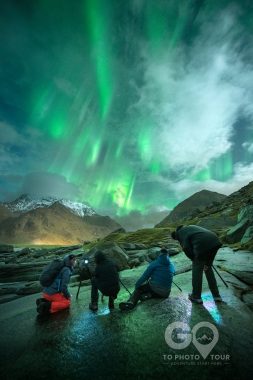 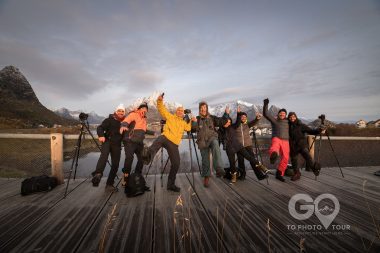 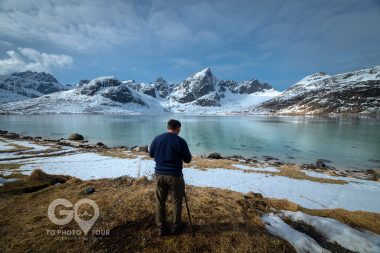 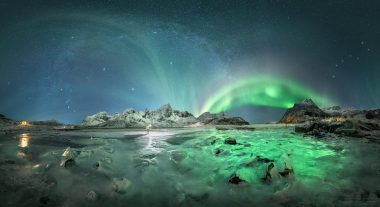 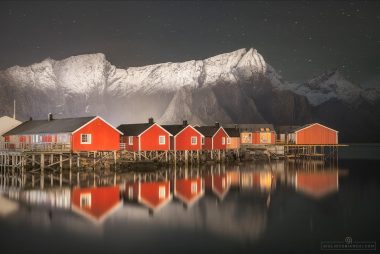 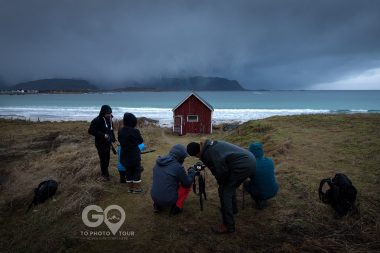 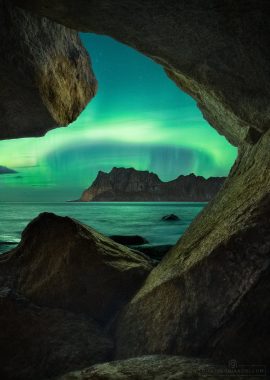